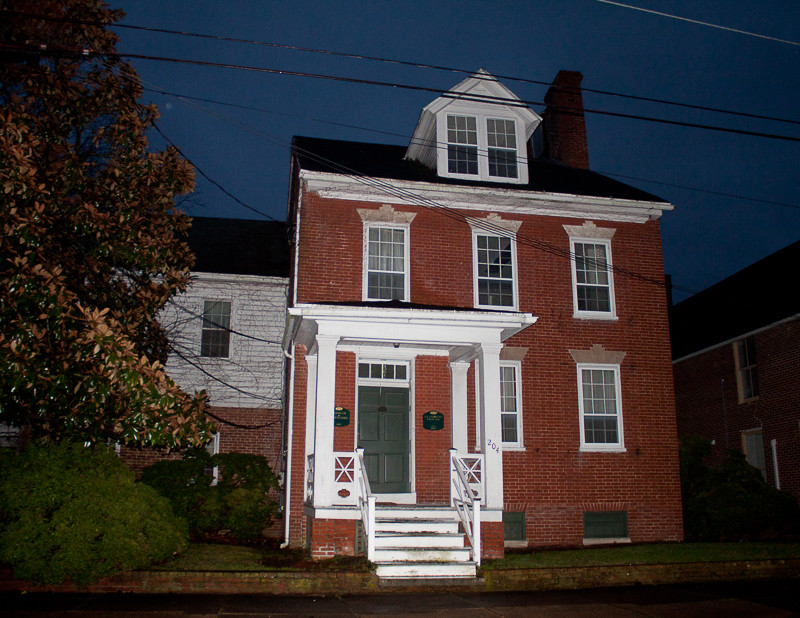 The LeCompte Curse – Blindness in the Male Line

We stop at theLeCompte House on High Street to tell this story. And while this  house has no particular haunted legend, guests on our ghost walks get more oddities in photos at this stop than any other stop on the tour (there are 14 stories shared on the tour).

The Federal-style brick house at the head of High Street known as the LeCompte House (pronounced Le-count in Dorchester County) was built in 1803 and purchased in 1842 by Samuel Woodward LeCompte, who was a navy captain in the war of 1812. He served on many fighting ships, including the Constellation, Brandywine, Erie and Vandalia. Ownership stayed in the LeCompte family through most of the twentieth century, and it is now the law offices of E. Thomas Merryweather. According to local legend, an ancient Indian curse has plagued the LeCompte family for over three hundred years. It dates back to the first LeCompte to settle in America.

Antoine LeCompte was born in France but later became a war hero in England. He was granted a patent for seven hundred acres along the Choptank River in 1659. This area is now known as the neck district of Cambridge, and it is bordered by LeCompte Bay, which is named for him. When the land was granted to Antoine, the Choptank Indians were settled on his land. In fact, during the time Antoine LeCompte moved onto the land granted to him, there were many more Indians in the Dorchester region than there were colonists. The Choptanks were peaceful people for the most part. They normally resisted conflict, took the path of least resistance and were more passive-aggressive than aggressive. When they were asked to move off the LeCompte lands, they would move, but then they would return. Antoine LeCompte had people working his plantation who would run the Choptanks off of his lands, and he also had a pretty good weapons arsenal. But eventually, Antoine LeCompte wanted a final solution to moving the Indians off this land, and story in a folklore collection I found in the Dorchester County library tells how he finally did it.

The Indians did vacate the lands. But they also placed a curse on the LeCompte family saying that because Antoine LeCompte was blind to the ways of peace, his sons and descendants will suffer blindness. Antoine’s son Moses did go blind, as did nine of his eleven children and over forty LeCompte descendants. In a commentary written about the LeComptes in 1819—shortly after the LeCompte house shown in the image in this chapter was built—nineteen of the living LeComptes were blind.

Melanie Merryweather and Warren Papin wrote a beautiful commentary about Captain Samuel Woodward LeCompte, who liked to be addressed as “Captain.” He was a descendant of Moses LeCompte, who was the son of Antoine who went blind and had so many blind descendants. The Captain’s portrait hangs in the Meredith House (now part of the Dorchester County Historical Society complex), and he is described as a “handsome gentleman in uniform, a saber on his left side and a pleasant, almost smile on his face. His youthful appearance is aged slightly by the muttonchops that sweep down the side of his face but give balance to the lack of hair on a high forehead.”

We know that Captain LeCompte was devoted to his wife and daughters through a collection of his letters, all of which were signed simply “LeCompte.” We also know that his two sons died when they were very little and that he lived here at LeCompte House for twenty years until he died at the age of sixty-eight. He is buried across the street in the Christ Church graveyard.

The LeCompte House is not a major stop on our Cambridge ghost walks, and it has no specific ghost story attached to it. The guides stop there primarily to talk about the Indian curse and how blindness still plagues adult males in the LeCompte family today. But something about the LeCompte House intrigues our guests, and it is one of the more photographed buildings on the tour. It is also one of the buildings that shows an unusual amount of anomalies in digital photographs taken by ghost walk guests. Even more surprisingly, the anomalies are similar even though totally unrelated people attending the ghost walks over a period of about a year shot the photographs. Understand that guests take many pictures on all of our ghost walks, and 90 percent (or more) show nothing out of the ordinary. But we’ve accounted for seven instances where guests got oddities or irregularities in their digital images of the LeCompte House. Six of them were of a shadow or what appears to be an outline of a person in the attic window (third floor). The seventh was a strange, dark shadow on the front porch.