The Hungry Ghost Moon is the name the Chinese gave to the full moon in the seventh month of the  lunar year – which happens to occur today, July 12, 2014. 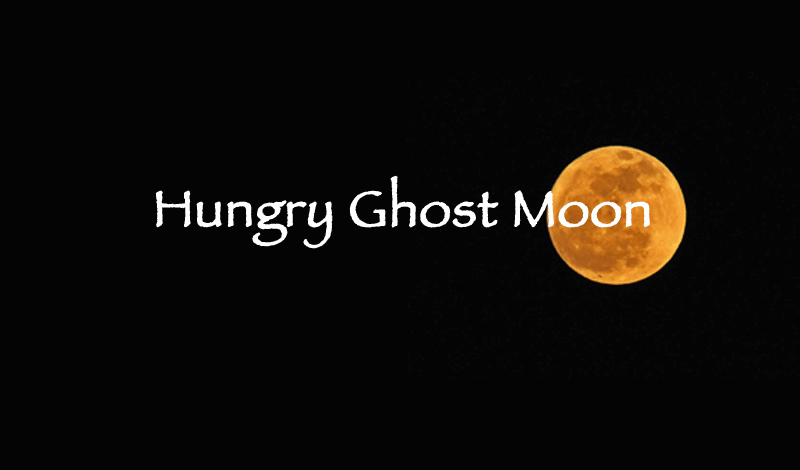 In the Chinese tradition, the time of the Hungry Ghost Moon is similar to how the ancient Irish perceived Samahain, a feast marking the beginning of the Irish Winter (October 31st – Halloween in North America).  It was a time when spirits could move freely from this world into the Other world or the Eternal world.  The veil separating the worlds was “thin.”

The Chinese believed that some spirits would return to where they were happiest, so it’s a time when you might see or feel the presence of your ancestors — or the people who formerly populated the landscape surrounding you.  But it is also a time when mischievous spirits make trouble and people can be more susceptible to bad energy from the spirit world.

Other Moon Names for the July Full Moon

The Pagans call this moon the Blessing Moon because it occurs when nature is particularly charged with fertile energy offering a harvest of abundance both in food and energy.

This is a time when earth energies are most strongly affected by the moon.  It’s during the three Super Moons that high tides are at their highest and low tides are at their lowest in the year.  People can become anxious or feel an excess energy.  It is a time of high emotion.

To prove this you can try this experiment.

When the moon is just rising above the horizon take a cardboard tube like the kind that holds paper towels or wrapping paper, and place it over one eye.  With that eye look at the moon through the tube, keeping the other eye closed.  The moon will appear normal.

Then immediately close the eye behind the tube and open the other eye.  You will see the moon look much larger.

Tonight we’ll be walking through the historic town of Pocomoke City on the Pocomoke Ghost Walk.  This is the only ghost walk that  follows a trail going 1/4 of a mile into the haunted Pocomoke Forest which is a swampy, forest full of bald cypress trees that flanks both sides of the mystical Pocomoke River.

The name Pocomoke originated with the Pocomoke Indians who lived along the river.  The name is said to mean “dark water.”  The Pocomoke River appears black or coffee colored due to the tar-like substance that the cypress tree roots secrete into the river.

Join us for an evening ghost walk along the Pocomoke.