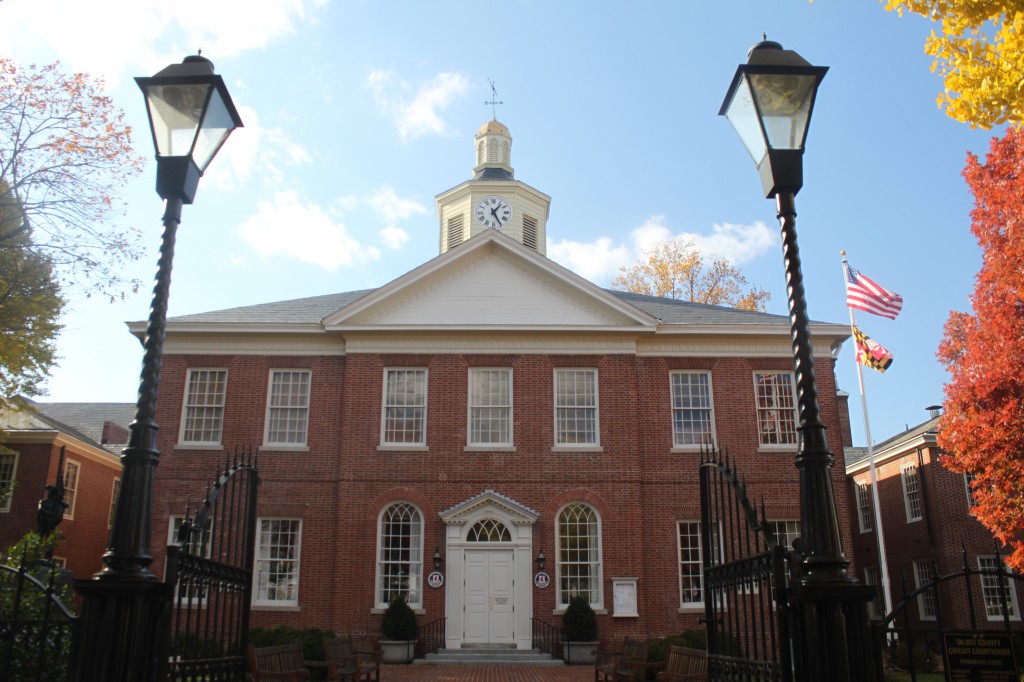 Probably one of the weirdest things about the Easton Ghost Walk is the elevator riding ghosts of Easton.  Within two square blocks in the downtown there are five historic buildings whose occupants report strange occurrences with the elevators.

Probably the most well known elevator ghost in Easton is the one in the historic Avalon Theater.  As a former owner of the theater tells … the Avalon was the scene of a murder.  The victim was an actress who was found dead in the elevator.  The former owner stated that he and an Avalon staff worker saw the spirit of the actress step out of the elevator, look at both them, then turn around and dissolve through the doors leading into the theater.

For years Avalon staff has claimed that the elevator rides on its own … whenever it likes. The “ding” of the door opening and no one getting on or off – especially after hours when the staff is alone –  is still startling.

The old Easton Jail which now serves as the office of the States Attorney has a strange elevator story as well, but it’s a one time occurrence.  The States Attorney’s Office is a secure building.  No one is granted free access except for a small area near the public entrance.

Staff on the 2nd floor of the States Attorney’s Office noticed a person in dark colored pants and a jacket standing in front of the elevator on the second floor.  Seemed strange as they hadn’t had anyone come through the public entrance.  One of them walked around the corner to investigate and the elevator person vanished. .. within seconds.  Both staff members saw the person at the elevator, yet in few seconds it took to walk around the corner to see who it was the person was gone.

The building in the picture above is actually two separate buildings.  The building on the left was once a hotel and later became the Easton Surgical Hospital.  The building to the right is the old Odd Fellows Hall.  Both buildings are now prime retail, office and residential space – they each have an elevator with a story.

People who needed a surgical procedure around the turn of the 20th century, would have to travel to Baltimore or Philadelphia.  Many died. A cluster of doctors joined forces and opened up a surgical hospital in this failed hotel. Surgeries were performed on the top floor and patient rooms were on the second floor.

Today, it is beautifully restored with upscale office space on the upper floors.  Several tenants who work evenings and weekends when the public entrance is locked, cite elevator and footstep activity.  One tenant said, “When you think you’re the only one in the building and then hear the elevator running and then hear footsteps, you check it out – see who it is.  We know all the tenants on this floor.  But there’s never anyone there. All the offices are closed with no lights on.”

The International Fraternity of Odd Fellows (IOOF) built this building as a meeting place for their Easton fraternity.  The Odd Fellows provided abundant service to the community, especially to the disadvantaged, but they also had some serious rituals they performed using human skeletons.  In this particular building, tenants claim the elevator runs on its own.

Residential tenants actually complained.  One who was close the elevator shaft said the thing runs at all hours of the night.  He’d investigate and find no one coming or going.  Other tenants noticed the same thing.  They claim that the landlord had an engineer come out and look at the elevator, but there was no noticeable defect.

Once I discovered the four properties mentioned above had elevator ghosts, I wrote the “elevator ghosts” story into our Easton Ghost Walks.  On the last ghost walk I did in Easton – which always starts at the Tidewater Inn – a Tidewater employee came out just to say “hi” to the group and listen to the Tidewater portion of the tour.  I asked her in front of the group, “Have you ever experienced the presence of Mr. Grymes or the little child known to be seen in the hotel?”

She replied, “I’ve never seen Mr. Grymes, but many have.  What gets me is the ghost on the elevator.”

Wow!  They just keep coming.  The Tidewater is haunted enough without an elevator ghost.  Then I got to thinking …. maybe it’s just one ghost… maybe the girl stashed in the Avalon Theater elevator after she was murdered is out trying out all the elevators in town. Or maybe the Colonel in the Courthouse – who is probably the same Colonel who owned Foxley Hall – is out inspecting the elevators.  Or maybe there’s a group of the phantom elevator riders trying out all the elevators in town and these five are the only ones we know about.

As someone who has collected over 500 ghost stories on the Eastern Shore, and someone who has done scores of personal interviews and crafted 20 different ghost tours  … I find this a strange phenomenon.

Check out our dates for upcoming Easton Ghost Walks

UPDATE:  After publishing this post at 11:40 am today, I received a comment on Facebook from author Helen Chappell of Talbot County.  She used to work in the Stewart Building which is across the street from the Courthouse and old jail.  She said the elevator there operated on its own in the late hours… Wow, a six elevator in 3 square blocks.  Helen’s commentary is below:

I hadn’t heard some of these stories. But I know the Avalon is haunted. A couple of times, when we were rehearsing various events there, I’d be on stage and see someone sitting in the balcony. When I looked up, they were gone. The ghost also haunts the landing behind the stage that leads down to the Green Room in the basement. Also, for a few years, I worked in the Stewart Building on the corner of Washington and Federal Sts. It was once a hotel. Since I worked for a newspaper, I would often be writing on deadline late into the night. The elevator would open and close when no one was there, and sometimes, very late at night, I would hear footsteps going up and down the second floor hallway. I never felt afraid either place. But coming out of Circuit Court, on the second floor of the Courthouse late at night after waiting for a jury to return a verdict, I’d come down the stairs and exit on the Federal Street side of the building to go back to my office across the street. Several times I felt someone following me along the steps and I’d have trouble opening the door from the inside. That creeped me out. The courthouse is full of ghosts. Ask anyone who’s worked there.