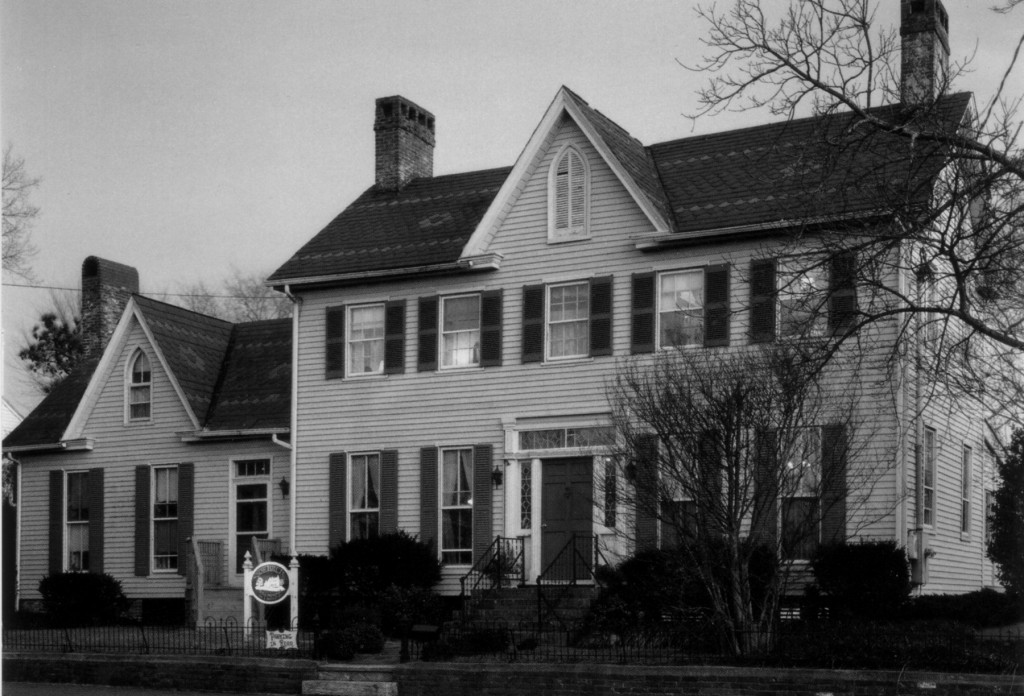 The Snow Hill Inn was the first haunted building I ever wrote about.  I became interested in the stories of unexplained events, candles lighting themselves, people getting locked in rooms, beds shaking in the middle of the night, strange reflections appearing in mirrors and windows opening and shutting at will shortly after I took a job working for the Town of Snow Hill in 2002.

The Snow Hill Inn was open for lunch and dinner and conveniently located in the historic downtown.  I heard many of the haunted stories from people who had actually experienced something.  Local people called this ghost “J.J.” and told about how the Inn was his childhood home and how he committed suicide by cutting his own throat.  His daddy was a mean old town doctor and J.J. was failing out of Pharmacology school. So he ended it all in a bloody mess right after he penned a note to his father saying, “…it is useless to keep me at school…”

I wrote about the ghost, the history of the house and the stories people told me.  I even incorporated a personal story about bathroom light in the Inn not turning on for me.  It turned on for half a dozen people in the dining room, but when I touched the switch and flicked it on, the light didn’t work.  Everyone everyone marveled at it, but almost everyone chalked it up to “J.J. playing tricks.”  The town simply accepted the haunting with no question.  Even the Mayor at the time commented to me about the Snow Hill Inn being one of the most haunted houses on the Eastern Shore.

So I wrote the story.  Later, I published online and National Geographic Television Network saw it and asked me to help them with an episode of the “Is it Real” series that was going to feature the Snow Hill Inn.  I accepted the offer.  My job was to delve into the research of who this ghost was and find out the truth about “J.J.” the doomed Pharma student. My research would provide half of the story.  NatGeoTV would bring in a medium, paranormal investigators and interview locals about hauntings.

I started my research with the alleged “mean old doctor” who was actually Dr. John S. Aydelotte.  He and his wife Delia lived in the house and raised their two children William and Mildred there.  He was a prominent member of the Snow Hill community and served as the town doctor operating from his house.  The west wing addition served as his office.

I’m not sure where the doctor got a reputation for being mean, but I did interview Snow Hill attorney, Bill Kerbin who was 90 at the time, and he remembered seeing Dr. Aydelotte in town as a child.  He didn’t remember much about the doctor personally, but he did say that the doctor didn’t tolerate children who got in his way when he was walking.  “He’d shoo them away with his cane.  If you didn’t get out of his way, he’d smack you with it.”  Mr. Kerbin also said that the doctor was very old at the time and maybe age had taken a toll on him.

In digging into the family history I found one descendant who was still on the Eastern Shore.  She was the great granddaughter of Doctor Aydelotte, and it was she who provided me access to these photographs.  She knew nothing about Dr. Aydelotte, in fact her middle name was Aydelotte and she wondered where it originated. The true story of the boy who grew up in the Snow Hill Inn and his eventual suicide began to unfold when this kind woman invited me into her home and showed me some framed pictures of family members she pulled out of the attic after my inquiry.  They’d been placed there by her grandmother, Delia Aydelotte – Dr. Aydelotte’s wife – when she’d lived in the house many years before.

They had not been disturbed since Delia placed them there when she left her Snow Hill home and came to live with her daughter, Mildred and her husband, Senator G. Walter Mapp of Virginia. The house later passed to the Senator’s son, G. Walter Jr. who was  a prominent Virginia attorney.  After his death it went to his daughter who was my contact who found the pictures.

Along with the portraits of Dr. Aydelotte and Delia were portraits of their two children, William and Mildred as well as a framed proclamation from the the 1905 School of Pharmacology expressing condolences to William’s stricken parents over his death.  The proclamation was signed by each student in the graduating class and professionally framed.

We sorted out who was who based on my limited information and my contact’s family recollections.  I snapped photographs of the pictures and returned home.

The first thing I determined was that there was no J.J.  That was a pet name given to the presence in the Snow Hill Inn by the owners of the Inn back in the early 1990s.  They knew an boy who lived there killed himself but many believed that the suicide happened in the home.  William, according to the Baltimore Sun article posted the day after his death in 1904, was living in Baltimore at a rooming house.  He was found at 8 am in his room writhing on the floor with blood spewing from his neck.  He had evidently cut his own throat ….. twice.

According to the one emergency responder who served as paramedic, police and medical examiner in this case – the young man cut his throat with a razor standing in front of his mirror and then cut it again when he was laying on his bed … then apparently threw the razor under the bed … then fell off the bed and was found on the floor .. still alive but bleeding profusely.  He died five minutes after arriving at the hospital.

But they found a note – an incomplete note, hand written on a sheet of paper, dated the previous day.  All it said was , “Dear Father.  It is useless to keep me in school ……”  It was never finished.  They also discovered that William had a girlfriend in Westminster (where he had previously attended college). She was someone with whom he had recently rekindled a relationship.  William had been sick with tonsillitis and missed several days of school and was evidently falling behind in school.  Who knows what other circumstances were involved?

G. Walter Mapp, Jr., the nephew of William Aydelotte was quoted in a Baltimore Sun article about the Snow Hill Inn as saying, “We never believed he killed himself.”  He went on to explain that people didn’t talk about suicide in those days.  There was shame attached to it.  He also pointed out that there was really no investigation, no impartial view of evidence … they found him, his throat was cut and there was a suicide note — the assumption was made and believed.

So, could there be an unrestful spirit that is trying to tell us something? A spirit who has a score to settle?  Was it William who was haunting the Snow Hill Inn?

I took the photograph of William shown above to two people claiming to have actually seen an apparition of a young man at the Inn.  Both were innkeepers.  One said he saw a reflection in the mirror of a man standing behind himself, but when he turned to look at the man, there was no one standing behind him.  The other person was an innkeeper awakened in the middle of the night to someone shaking her bed violently.  She saw the face of a young man a the foot of her bed.

When shown the photograph, both people affirmed without hesitation that the person they saw was William Aydelotte.

Today the Snow Hill Inn is vacant as it has been for nearly 10 years.  It was recently bought by a local builder who has a reputation in Snow Hill for bringing derelict dwellings back to life.  Here’s hoping he can put the Snow Hill Inn back together again, and we’ll see if William still wants to be known. 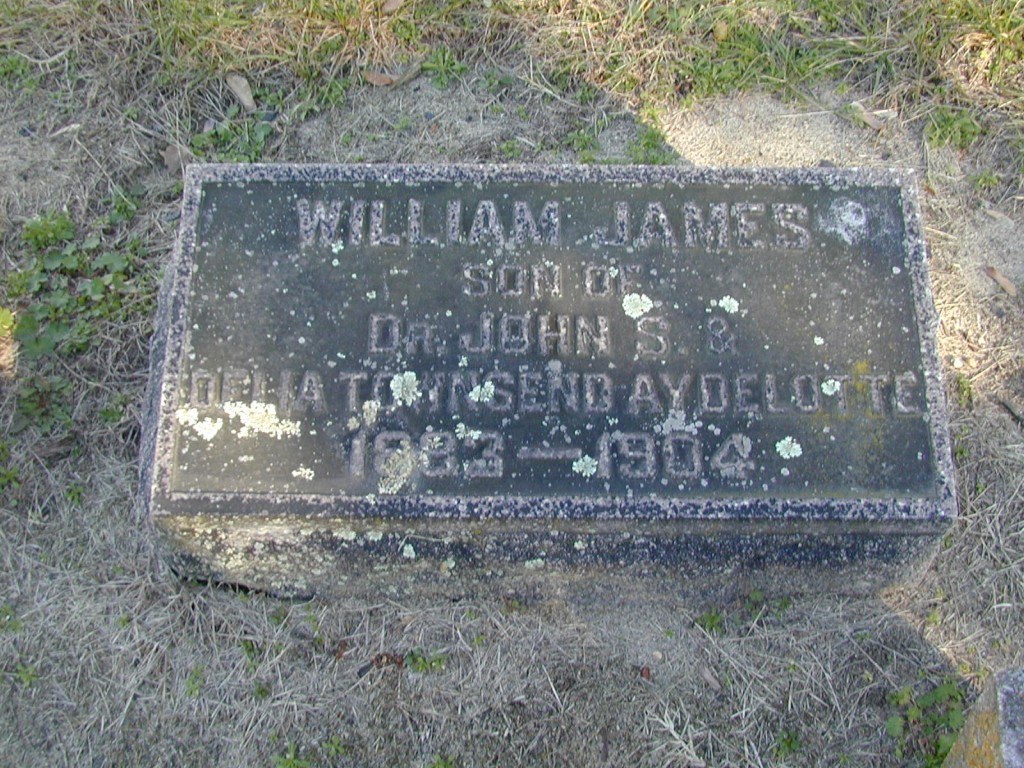